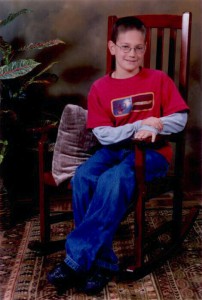 When Nick was diagnosed with his second cancer, his Uncle Alex was put in touch with a healer in the southern most region of Argentina. The healer did not accept money or expect anything in return. He offered a gift. Alex sent the healer this photograph of Nick and was able to arrange a phone call with him. The healer knew a great deal about Nick and described personal things to Uncle Alex that it would have been impossible for him to know. The healer asked that that Nick take Cat’s Claw and he predicted was that Nick would overcome the cancer and lose his tumor through his nose. On December 26th Nick had a nose bleed that lasted almost 2 1/2 hours.