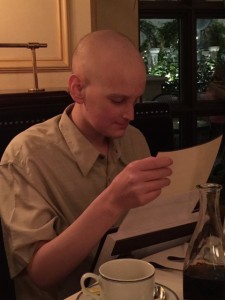 As Joey posted on September 15th, faced with the possibility of losing his upper teeth sooner than later and thus losing the ability to eat food that he so loves, Nick decided to pursue the surgical option. We all thought this was a good decision and with the proposed surgery we were offered a small glimmer of hope that perhaps the tumors in two locations might be surgically removed. The procedure would involve taking tissue from his stomach to fill in the two openings in the roof of his mouth (caused by cancer #3 and cancer #4), removing bone from his leg and placing it inside of his mouth to support and to prevent his face from collapsing, removal of his upper teeth (probably for the rest of his life) with intent to remove the tumors, and removal of skin from one of his arms to create a flap/graft to cover the hole in his cheek. There would be risk of infection, risk of the bone and skin grafts not taking since much of the tissue and bone has been subject to radiation, and finally the risk that Nick might spend the last few days of his life in a hospital.

We met with the microsurgeon to review the goals of the surgery. Dr. Rosenthal laid out the procedure as outlined above for Nick to glean a better understanding. After a short pause Nick spoke with calm and poise:  “I think I would rather forego the surgery.” I understand the decision and I love and support Nick in this decision with every bone in my body for having the strength to make any decision during this difficult time. I know this is the best for his spirit but I also know it closes the door to a cure.

I sat numb in my chair, overcome by great sadness as I watched Nick’s mom, Tammy,  get out of her chair to give him a big hug and softy speak through her tears:  “My heart is broken.”